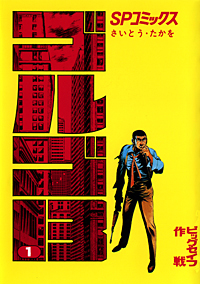 Golgo 13 is a long-running action/drama manga created by Takao Saito, first published in 1968, about the titular assassin. The manga has been adapted into an animated movie by TMS Entertainment and a 60-minute OVA sequel, The Professional and Queen Bee, along with two live-action movies and several video games. A TV anime based on the series aired in Japan in 2008.

Duke Togo (codename: Golgo 13) is a mysterious Cold Sniper of indeterminate but somehow Japanese ancestry, who is notorious for never failing an assignment. He follows several rules about his assignments (for instance, he will only meet clients once, and refuses to enter long-term contracts with clients), but he will accept any job without moral compunctions. However, his clients must always tell him their reasons for the job and be honest about them — and any betrayal or double-crossing will not be forgiven.

Like James Bond, his Spiritual Ancestor, he is a successful womanizer, but he's also notorious for maintaining the same unchanging expression during sex as he does in the rest of his life.

Golgo 13's adventures have been adapted to: