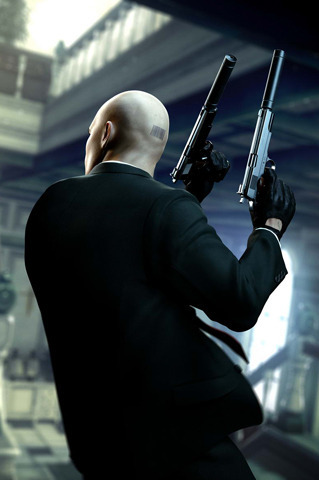 Death is his business,
and business is good.
"This room. This bullet. There's a bullet for everyone... and a time, and a place. An end."
— "Hunter and Hunted", Hitman: Contracts
Advertisement:

Hitman is a series of third-person stealth games by Danish developer IO Interactive.

Each title follows the career of Agent 47 (voiced by David Bateson), a bald, genetically-engineered super assassin. Aided by his handler, Diana, he works for a clandestine agency while avoiding the law and rival assassins. Hitman levels are essentially standalone James Bond or John Woo movies in of themselves.

Players are scored on stealth, so ideally, you should only kill your targets and leave without alerting anyone, like a real assassin. That said, if (hah! when) you are discovered, or if you become addicted to the Ragdoll Physics, you can Rambo your way through everything in your path — but you won't escape the consequences if you leave a trail of bodies behind you. The missions aren't really designed for cover-based shooting, and you'll soon find that stealth is far more fun and rewarding. Or you can just cave their noggins in with a fire extinguisher, that works too.

The games are well known for their replayability and emphasis on variation. Most missions are designed to be replayed multiple times, as there are many ways to achieve a kill. Sure, you can just shoot that target, but it feels a lot more gratifying to kill them by poisoning their food, putting a bomb in their car, dropping them off of a high place, or perhaps something more unique for the given situation. While certain methods must be used in order to reach the highest ranking, there is nothing in place to discourage experimenting, and the astute, intelligent, or observant player may find a solution to a problem they thought impossible.

The Hitman series contains examples of:

47 disguising as a security guard in Hitman 2's "Golden Handshake" mission. This particular guard however, has the traditional hearts on his underwear.

47 disguising as a security guard in Hitman 2's "Golden Handshake" mission. This particular guard however, has the traditional hearts on his underwear.