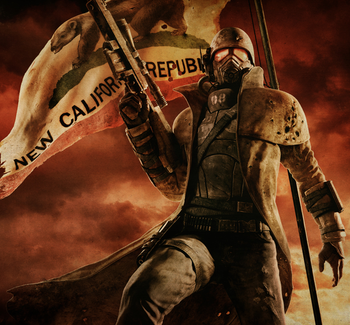 A subtrope of Coat, Hat, Mask.

Basically any character that wears a gas mask and, well, a longcoat. Occasionally, there will be a good reason for this, like the character deals with cold weather and/or toxic fumes on a regular basis, but mostly these characters exist because it looks really cool. Trench coats or dusters seem to be the preferred apparel, though other kinds of long coats are acceptable. To make it easier to breathe, some models allow you to hook up a motorized air pump to make sure you get enough air.

Often works as a particularly stylish variant of Hazmat Suit.

Can be one sign of a Post Apocalyptic setting with an unlivable environment (see Post Apocalyptic Gasmask for that). Also common attire for Doom Troops thanks to the dehumanizing and vaguely skeletal/insect-like look of gas masks as well as the implication that Weapons of Mass Destruction are in use by one or more sides. Either way, you are almost certainly living in a Crapsack World if this look is practical or common. See also Putting on the Reich.

Can overlap with Gas Mask Mooks if said mooks also include trenchcoats in their uniforms. Not to be confused with Badass Longcoat, although it can overlap. For a more historical version see Plague Doctor.