It's the Principle of the Thing 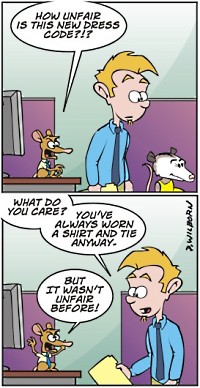 Flim: Um, hey, listen lady...
Flam: How about you just take a parakeet and go home?
Sunset Shimmer: [enraged, slaps stuffed parakeet away] IT'S NOT ABOUT THE PARAKEET!
— My Little Pony: Equestria Girls – Rollercoaster of Friendship
Advertisement:

Say a character ends up involved in a situation to where at first glance, the problem is rather trite or rather mundane. However, for this character, it's not about the problem itself, but the situation or underpinnings that caused the problem. To them, the point is not just on the problem, but the larger meaning and implications behind it.

For example, say Bob ends up with the wrong order and is annoyed that the restaurant will not acknowledge the obvious wrong-doing. Alice may point out that the meal does not cost much and offer to buy another. Bob would note it is the the fact that the restaurant violated the nature of providing quality customer service in the first place.

Sometimes it may not be the person who got wronged making the complaint, but a friend or loved one doing so since the person they cared about may have gotten screwed over and that shouldn't happen.

A Principles Zealot often may rely on this a lot to explain their actions. Sometimes used to justifiy the Law of Disproportionate Response. Often goes hand-to-hand with the Frivolous Lawsuit and Honor Before Reason ("Doing what's right, or at least what you think is right, even if it's foolish"). Sunk Cost Fallacy could be a potential extreme of this.