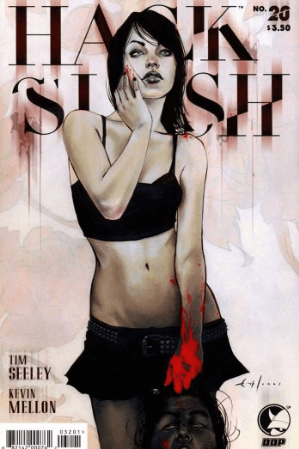 Cassie: A slasher. It's a type of undead, I guess... sort of like a vampire or a zombie. They're so full of anger that they don't wanna die. They hate love, youth, sex... things they miss, from life. All I know for sure is that they're mean and hard to kill.
Kyle: How do you know all this?
Cassie: Because, I'm Cassie Hack. I'm mean, I'm hard to kill, and I hunt slashers.
Advertisement:

Cassie Hack was an ordinary outcast high school nerdgirl until her mother, Delilah, was discovered to be a serial killer (dubbed "The Lunch Lady") who had been murdering the students who had been bullying her daughter. Even worse, after she killed herself she came back from the grave as a "slasher": an undead serial murderer powered by hate and rage and existing only to carry on killing. To make things even worse, Cassie ended up having to personally re-kill her by shooting her several times in the face.

Now Cassie wanders the USA, channeling her guilt and pain into hunting down and destroying the other slashers who stalk the nation. And wearing a fine assortment of highly revealing gothwear.

Her only friend is Vlad, a hideously deformed but kindly giant whose odd upbringing by a reclusive butcher left him with No Social Skills but excellent meat cleaver moves. Together they kill zombie mass murderers, and the odd deserving living person. Aiding the two is the so-called Hack/Slash, Inc., founded by would-be slasher victims Doctor Lisa Elsten and Chris Krank, which provides info, and whatever resources they can spare.

Hack/Slash is a comic series originally published by Devil's Due, and written by Tim Seeley. A series of one-shots and miniseries illustrated by various artists, published between 2004 and 2007, were followed by an ongoing series, illustrated at first by Emily Stone. In early 2010 it was announced that due to Devil's Due's financial difficulties the series would be transferring to Image Comics. During the rest of the year both publishers issued Hack/Slash material: the Devil's Due series continuing until issue #34 while Image produced a "Year One"-style mini-series titled My First Maniac and a few one-shots. The ongoing series restarted from #1 at Image in 2011, and concluded with #25 in 2013.

The 2013 crossover book, Army of Darkness vs. Hack/Slash, teams Cassie up with Ash Williams and is set shortly after the end of the Hack/Slash series, with a major emotional arc inspired by the events of the finale. There have also been crossover miniseries with Eva and Vampirella, and a one-shot with Mercy Sparx, although these were less significant to the series' plot.

2014 saw the beginning of a new volume, Hack/Slash: Son of Samhain, by Michael Morecci and Steve Seeley, which follows Cassie's attempts to build a new life as a "normal" person. These are subsequently derailed by an old monster-hunter named Delroy, who enlists her to go after a new cult of monsters. The series was cancelled after the first, status-quo-establishing, arc. In 2017, a further revival series began under the title of Hack/Slash: Resurrection, written by Tini Howard, which begins with Cassie in her mid-twenties and is ambiguous as to whether Son of Samhain is still in continuity, though it does reference her Bounty Hunter job there offhand. With that series' conclusion, 2018 and 2019 saw a Crisis Crossover in the form of Hack/Slash vs. Chaos!, again penned by Seeley, and followed by The Crow: Hack/Slash.

Has both a live-action film and a motion comic ("illustrated film") in Development Hell, with Brea Grant

slated as the voice of Cassie in the latter. The wiki can be found here

, and the unofficial official site can be found here