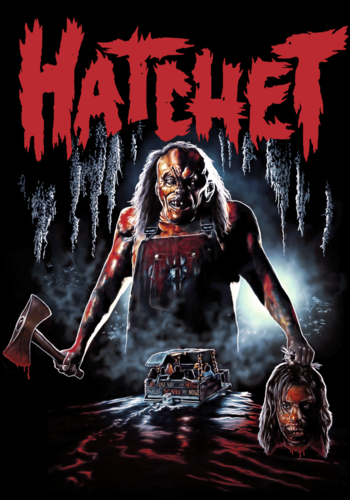 If you're looking for the Gary Paulsen book, click here.

Hatchet is a troperiffic 2006 slasher movie written and directed by Adam Green, who also directed Frozen (not THAT Frozen).

A long time ago, Victor Crowley was born in the Louisiana bayou horribly disfigured, becoming the butt of jokes among the other kids. One day, he is accidentally killed during a prank gone wrong, and his ghost continues to haunt the bayou. Years later, a haunted river cruise run by an inept boat pilot heads into a closed-off section of the river and runs aground, forcing the nine people on board to get off and hike back to New Orleans. Problem is, Victor's ghost still haunts these woods...

Hatchet was created as a throwback to the golden age of slasher movies in The '80s, and it shows. It gleefully employs all of the tropes used by said movies, all while cranking the gore to almost-unthinkable levels (it had to go through two months of recuts to get an R rating). The film quickly gained a massive following among horror fans for its reconstruction of the slasher genre, and two sequels were released in 2010 and 2013, with a fourth installment, Victor Crowley, released in 2017.