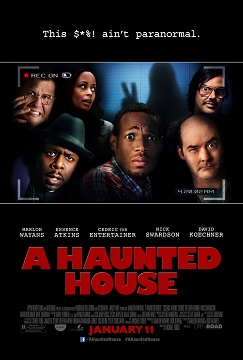 A Haunted House is a 2013 film starring Marlon Wayans, Essence Atkins, Cedric the Entertainer, and David Koechner. It's a parody of the The Devil Inside and the first installment of Paranormal Activity.

The story revolves around the couple Malcolm and Kisha who are stalked by a ghost soon after Kisha moves to Malcolm's house.