Film / The Devil Inside 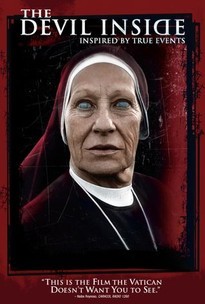 The Devil Inside is a 2012 found footage horror film directed by William Brent Bell, revolving around a woman who gets involved in a series of exorcisms during her search to find out what happened to her mother, who murdered three people as a result of herself being possessed by a demon.

The film was initially written as a conventional thriller, but studio disinterest prompted a retooling into the found footage format, which led to it being picked up by Paramount in hopes of having a repeat of Paranormal Activity's success on their hands. While it saw uncharacteristically high profit levels for a horror film of its time ($101 million gross on a $1 million budget, partially because of a well-edited trailer attached to copies of Paranormal Activity 3), any further financial gain past its opening week alongside plans to continue the film's story were swiftly dashed. This can be attributed to its unanimous critical panning, primarily for an ending that has gained far more notoriety than the film has relevance.

Has no relation with the Survival Horror game of the same name, which came out 12 years earlier, or with the YouTube series, though it shares a similar premise.