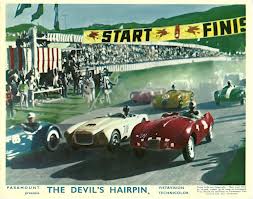 Cocky auto racer Nick Jargin (Wilde) has retired from auto racing since he nearly caused the death of his brother Johnny (Pennell) at a hairpin bend on a circuit, and now runs a trendy bar called the “King’s Room” which keeps him busy full time.

One day, sportswriter Mike Houston (Milton) goads Nick into coming out of retirement and challenging new champion Tony Botari (Kosslyn), particularly after egotistically saying in an interview that Botari has no real competition now that he's out of the sport.

Nick decides to returns to competition and this time around he will not only have to beat his new rival but also his own demons, with his brother Johnny, Kelly James (Wallace) along with her pretty lover Danny Rhinegold (Franz), his no-nonsense mother (Astor), and the patrons at the bar by his side.

Tropes appearing in this: