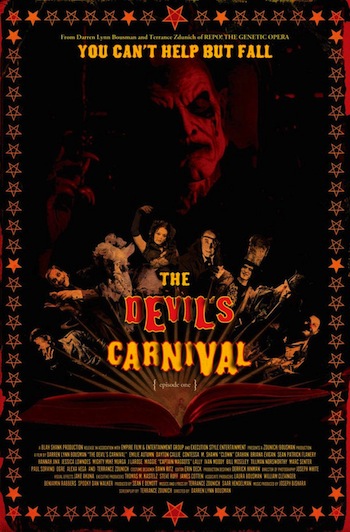 "Tongues, tongues, slither in the mud; that’s how a carnival grows, my son."
— Lucifer
Advertisement:

The Devil's Carnival is a short film directed by Darren Lynn Bousman and Terrance Zdunich. It is a Spiritual Successor of sorts to their previous cult hit Repo! The Genetic Opera with several actors returning in different roles.

The story revolves around three desperate individuals who find themselves at a carnival set in Hell run by Lucifer (played by Zdunich) himself. There they endure the repetition of the transgressions that lead them to Hell in the first place.

A sequel, Alleluia! The Devil's Carnival, was released in 2015.