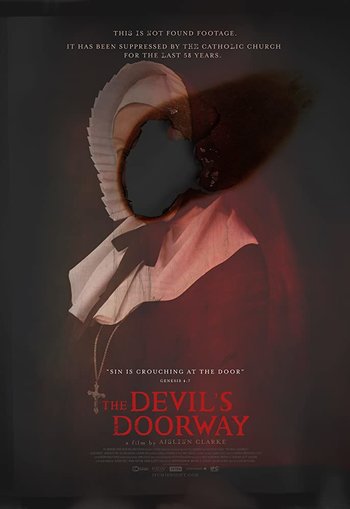 This Is Not Found Footage. It Has Been Suppressed by the Catholic Church for the Last 58 Years.
For over 200 years, the Catholic Church in Ireland held women in asylums called 'Magdalene Laundries'. They held prostitutes, orphans, the abused, the mentally disabled and unmarried pregnant women. In 1960 two priests were sent to a Magdalene Laundry to film their investigation into a reported miracle.
Advertisement:

The Devil's Doorway is a 2018 found footage religious horror film from Ireland directed by Aishlinn Clarke about supernatural goings-on in a Magdelene laundry in 1960s Ireland - in conjunction with the realistic historic horrors inflicted upon the young women and girls imprisoned within the laundry at the hands of the nuns and clergy that was hidden away by Irish society at the time.

Two priests, the young and idealistic Father John Thornton (Ciaran Flynn), and the older and cynical Father Thomas Riley (Lalor Roddy) are sent to investigate reports of statues of the Virgin Mary crying blood in one of Ireland's many Magdelene laundries - institutions established by the Irish Catholic Church originally to care for and socially rehabilitate women at risk from alcoholism and prostitution in the late eighteenth century, but over time became prisons for any girl or young woman deemed impure or sinful in the rigid Irish Catholic social dogma that permeated Irish society throughout the 20th century. As the two men of the cloth investigate, the young Fr. Thornton filming their mission with by order of the bishop, the cruel and abusive treatment of the women at the hands of the nuns becomes horrifically apparent alongside the alleged blood from the statues give way to reveal something more sinister afoot.

For those unfamiliar with this particularly dark chapter of Irish history think The Handmaid's Tale meets The Exorcist meets Paranormal Activity.

For a more realistic film account of these places see The Magdalene Sisters, thought one may argue that it is only more realistic in the absence of the supernatural.

No relation to the second Witchboard film which was titled Witchboard 2: The Devil's Doorway, through they both deal with demonic possession and supernatural horror.

The Devil's Doorway contains examples of the following tropes: