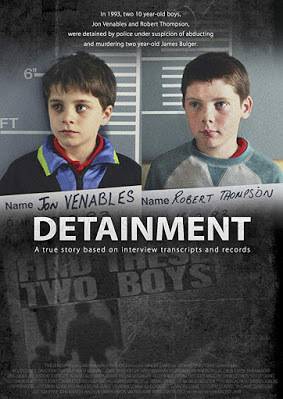 Detainment is a 2018 short drama film directed by Vincent Lambe. It is an account of one of the most disturbing crimes of the past century, namely, the 1993 murder of a Liverpool toddler named James Bulger

. The film focuses on the two young perpetrators being questioned by the police (about 80% of the dialogue is taken word-for-word from interview transcripts).

The film opens with the boys in question, Robert Thompson and Jon Venables, being taken to the police station with their parents where they are interrogated by the police. Venables is terrified at the prospect of being punished for what he has done; Thompson keeps his head held high and swiftly denies any involvement. Gradually, the police get the boys to confess what they have done. As the boys tell their story, several flashbacks play out that show them abducting Bulger and walking with him through the streets of Liverpool, before they stop at the rail yard and kill him.