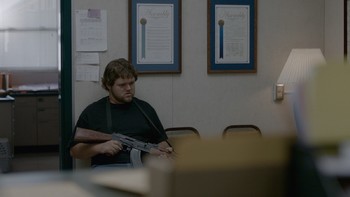 It opens on what seems an unexceptional day at an elementary school in Atlanta, Georgia. The receptionist, Cassandra Rice (Tarra Riggs of The Help) thinks nothing of it when a rather heavyset young man named Steven Hall (Bo Mitchell) enters the office and asks to make a phone call. Soon, however, the young man pulls out an automatic weapon from his backpack. Unlike many

other incidents in American history, however, the young man with the machine gun does not start shooting, but winds up taking Cassandra the receptionist hostage. A tense standoff ensues as Cassandra tries to talk Steven down and prevent a tragedy.