Putting the Pee in Pool 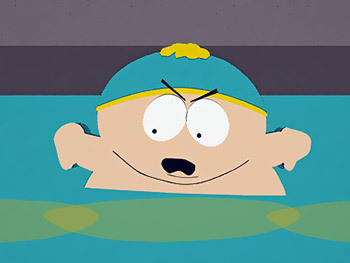 Weak!
"Welcome to our 'ool. Notice there is no "P" in it. Please keep it that way."
— sign commonly erected at public pools
Advertisement:

Someone urinates (or, occasionally, defecates) in a swimming pool, either by accident or on purpose. If it's an accident, it's also a Potty Failure. Usually in cases of urinating on purpose, the offender believes that because the water is chlorinated it will clean itself... or they're that much of a jerkass that they just don't care. This is almost always Played for Laughs, but it can be Played for Drama if needed. This is one way to put some Toilet Humor into a work.

Fish, whether in tanks, aquariums, lakes, rivers, oceans, and ponds, relieve themselves in the water they live in by default. Ducks and other waterfowl swimming in ponds and lakes naturally relieve themselves in water. These animals can also use the trope to put some Toilet Humor in a work.

Compare Urine Trouble, or Excrement Statement. See also Underwater Fart Gag for another toilet joke involving water. If it's in a lake, river, or the ocean, it counts as Nature Tinkling. See Foul Ball Pit if someone's peeing in the ball pit.

open/close all folders
Anime and Manga
Advertising
Comic Books
Advertisement:
Film - Animated
Film - Live-Action
Literature
"Okay, I haven't done so, and you probably haven't either, but somebody does, which leads to bacterial growth, and chemicals to combat said bacteria. Eventually, it'll get to the point that there's no actual WATER in the pool, just urine, bacteria and chemicals. This is why you never see the owner of the pool swimming."
Jokes
Live-Action TV
Music
Newspaper Comics
Professional Wrestling
Stand-Up Comedy
Urban Legends
Video Games
Web Animation
Webcomics
Web Video
Western Animation
Real Life
Feedback