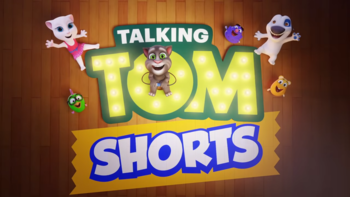 Talking Tom Shorts is a series of short subjects (about a minute each) as a tie-in to My Talking Tom Virtual Pet game released in late 2013, althought it would later be Retooled to tie to more similar games released later, these being My Talking Angela, My Talking Hank, My Talking Tom 2 and more recently, My Talking Tom Friends. It's also the second Animated Adaptation of the Talking Tom franchise.

In this show, Tom interacts day by day in different activities, and lives adventures (and misadventures) with The Hand, and later with Angela, and much later with Hank, who both would join later in the series. In the second half of Season 2, the show would receive a major overhaul, with the characters getting redesigned, and Ben, Ginger and Becca joining to the main roster.

Not to be confused with the earlier adaptation Talking Friends or the later ones Talking Tom and Friends, Talking Tom And Friends Minis and Talking Tom Heroes.