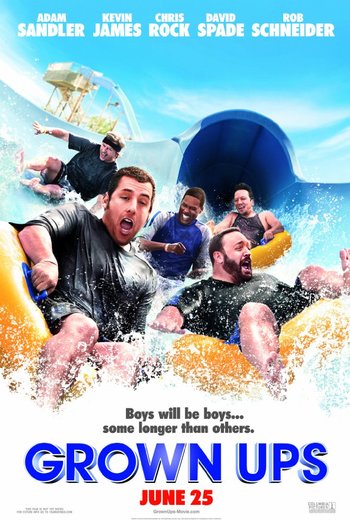 Some guys need a little extra time to mature.
Grown Ups is a 2010 American comedy film starring Adam Sandler, Kevin James, Chris Rock, David Spade and Rob Schneider. A reunion/vehical of sorts for the "Bad Boys of SNL,"note Bar James, the above-listed actors were famous in the early 90s for introducing a then-fresh brand of crass, sophomoric humor to Saturday Night Live, saving the show from a brief slub in the 80s. James's role was originally intended for fellow "Bad Boy" Chris Farley, but the film fell into Development Hell when Farley died in 1997. the film also stars fellow 90s Saturday Night Live alums Tim Meadows and Norm MacDonald, as well as future SNL stars Colin Quinn and Maya Rudolph. Sandler and Fred Wolf wrote the script and Dennis Dugan directed. The film was produced by Sandler's production company Happy Madison Productions and was distributed by Columbia Pictures.
Advertisement:

Thirty years after graduating from high school, five former basketball teammates Lenny Feder (Sandler), Eric Lamonsoff (James), Kurt McKenzie (Rock), Marcus Higgins (Spade) and Rob Hilliard (Schneider) gather at the lake house where they celebrated their biggest victory to mourn the passing of their late coach. Over the course of the Fourth of July weekend, the five friends realize that just because they've all grown up and started families doesn't mean that they've lost that old spark. Adulthood is what you make of it, and no one at the lake house is eager to be the grown-up of the gang.

A sequel was released in July 2013, where only Sandler, James, Rock and Spade returned (Schneider was unable to reprise his role due to scheduling conflicts and his wife was pregnant during production). The sequel got extremely negative reviews and was a box office bomb. But it kicked off the The Worst Idea of All Time podcast by the New Zealand comedians Guy Montgomery and Tim Batt, who took on the challenge of watching the movie and reviewing it once a week for a year.

Not to be confused with Jaleel White's short-lived UPN show.