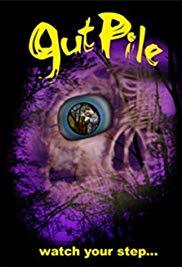 Gut-Pile is a 1997 American Slasher Movie.

Dan is a hunter who accidentally shoots a man. To avoid getting in trouble, he buries the poor sap in the woods. A year later, Dan is back in the same woods on a hunting trip with his friends. The spirit of his victim returns from the grave, seeking revenge and killing anybody in his way.