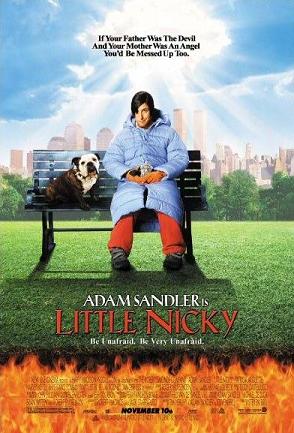 A Black Comedy Fantasy film from 2000 starring Adam Sandler as the eponymous Nicky.

Nicky is the third son of Satan, and unlike his older brothers Adrian and Cassius, is not intelligent, strong, or all that evil, but as described by his father is "such a sweet boy". After 10,000 years ruling Hell, Satan is expected to step down from his throne and let one of his kids take over, but he feels none of them are ready yet because he believes in a Balance Between Good and Evil, so he shall continue to rule. Adrian and Cassius are furious over this and, rather than spend another 10,000 years waiting to be given power and authority, decide to leave Hell to go to Earth and make their own claims there.

Unfortunately, their passing through the gates of Hell causes them to literally freeze over: no new souls can enter, and Satan begins to lose his powers. The only way to put things right is to force Adrian and Cassius to come home, but Satan is too weak to go, so Nicky has to do it. With an enchanted flask he can use to trap his brothers inside to force them to come back to Hell, Nicky travels to Earth to try and capture them and save his father. Hilarity Ensues.