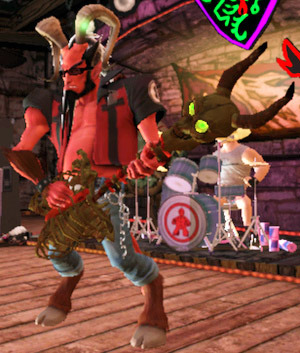 The Devil is involved directly in rock and roll, whether it be grabbing a guitar himself, or giving a musician some form of supernatural assistance.

After all, if rock and roll is a message from Satan, then Satan should rock out harder than anyone else. Ties into the moral panic surrounding rock and roll when it first came on the scene — many self-proclaimed Moral Guardians criticized it as "the Devil's music."

The trope name is a pun on the song "Rock Me, Amadeus!" by the late Falco, Asmodeus

being a Talmudic demon king.

Subtrope to Rotten Rock & Roll. Compare Villain Song, Heavy Mithril. Not to be confused with (though not mutually exclusive to) the demon prince Asmodeus.

This is not about musicians worshiping Satan, being accused of such, or mentioning Satan in their music. This requires the devil to get directly involved with the music.