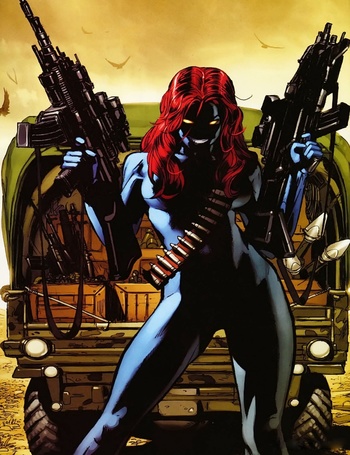 To be honest, her hair isn't always red.
"They called him Malpelo, which means 'evil-haired', because he had red hair: and he had red hair because he was a bad, malicious boy, with every promise of growing up into a first-rate rascal."
— Rosso Malpelo note  evil-haired red
Advertisement:

Some heroes are redheads and we all know that Heroes Want Redheads. By contrast, there are also Evil Redheads. These are characters who are Exactly What It Says on the Tin. (Not to imply that heroes can't want evil redheads.)

This trope is Older Than They Think — red hair was supposedly a mark of a witch and favored by Satan himself. In the Balkans, people unfortunate enough to be born with red hair were said to be doomed to rise as vampires when they died, if they weren't vampires already. In some parts of Eastern Europe, babies born with red hair were once common targets of infanticide.

Bullies in school media often have red hair because of the temperamental redhead stereotype. Note the dovetailing with the Violent Glaswegian, though that seldom overlaps. Contrast Redheaded Stepchild, wherein the redhead is despised but not necessarily evil, as well as the growing tendency over the past few decades for heroes to have red-haired romantic interests, especially green-eyed ones.

May be used to visually demonstrate the difference between this character and the blond or dark-haired hero.

Also see A Sinister Clue, another indicator of evil stemming from an ancient superstition.