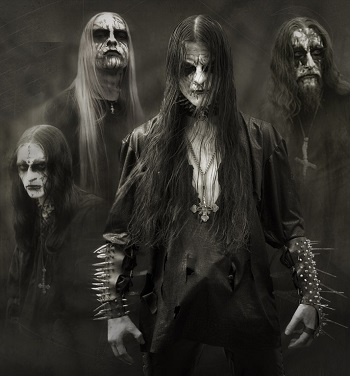 Interviewer: What would you say is the biggest influence in Gorgoroth's music?
Gaahl: ...Satan.
Interviewer:And what does Satan mean for you?
Gaahl: ...Freedom.
— Metal: A Headbanger's Journey
Advertisement:

Gorgoroth are a Norwegian Black Metal band, infamous for their constant lineup changes due to the history behind many of the band members involved within them. Ever since its birth, guitarist Infernus has run the band by himself after vocalist Hat and drummer Goatpervertor left. Vocalist Pest and bassist Ares came into the band, with Pest doing the other half of the vocals on Antichrist when Hat left.

In April 1996, they toured alongside Satyricon and Dissection, following a recording of the EP The Last Tormentor. Eventually, they became a big name in the European Black Metal scene. In that same year, Under the Sign of Hell was recorded and released. In 1997, they were signed onto Nuclear Blast until 2004, much to the dismay of the more hardcore black metal fans due to the perceived image of "selling out".

It was then Gaahl had joined the band and made his debut on only one track off Destroyer. He would proceed to do almost all of the vocals on Incipit Satan. In 2002, Gaahl was arrested for his infamous beating. The controversy did not end there for the band, as in 2004, a shooting of a concert taking place in Poland was not viewed well from the Polish due to the Satanic nature and animal cruelty of the concert, as the stage had various Satanic symbols and decapitated sheep on stakes. This event alone had Gorgoroth dropped from the Nuclear Blast Roster and were forced to sign up with Regain Records for Ad Majorem Sathanas Gloriam.

In 2007, Gaahl and King Ov Hell tried to take hold of the Gorgoroth name by attempting to fire Infernus. Due to the dispute, they had to take it to the court, which ruled off the band under Infernus, effectively kicking out the former two. Pest came back after Gaahl's ejection, and Obituary bassist Frank Watkins joined. Quantos Possunt ad Satanitatem Trahunt was finally released, and was Pest's only album that he was on before he got fired in 2012, not counting the 2011 re-recording of Under the Sign of Hell. In 2015, bassist Frank Watkins passed away after a long battle with cancer.