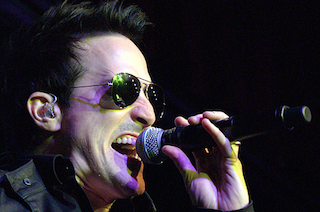 Richard Patrick doing what he does best - yelling at us.
"I got close to kind of getting a record deal, and [Trent] didn’t know it at the time, but I had already lined up Warner Brothers, and I was in Los Angeles to kind of work on The Downward Spiral, or just be around, and I had already kind of made a decision on a mushroom trip in the Grand Canyon. I had already decided. I was like, ‘You know what? I’m only getting on this ball one time, and if I don’t step out on my own now, I’m never gonna do it."
—Richard Patrick in a 2020 interview

Filter are an American Industrial Metal band who formed in Cleveland, Ohio, by guitarist and vocalist Richard Patrick, brother of actor Robert Patrick. Patrick had recently left an early incarnation of Nine Inch Nails and, together with longtime friend Brian Liesegang, signed to Reprise Records in 1994 and rechristened themselves Filter. They recorded the album Short Bus in Chicago, which wound up spawning the hit single "Hey Man Nice Shot", which was written about the infamous public suicide of Pennsylvania state treasurer Budd Dwyer, although it was rumored to be also inspired by the suicide of Kurt Cobain, which the band denied. Filter quickly assembled Geno Lenardo on lead guitar, Frank Cavanagh on bass, and Matt Walker on drums as a touring band.

Liesegang was not long for the group due to Creative Differences, and left the band after a string of soundtrack recordings recorded by Filter, which included a collaboration with The Crystal Method for “(Can’t You) Trip Like I Do” (for the Spawn soundtrack) and a cover of Harry Nilsson’s “One” (for the The X-Files: Fight the Future soundtrack X-Files: The Album). Recording sessions proved stressful, and the supporting band left out of frustration, briefly leaving Patrick alone. After constructing his own studio, Abyssinian Son, and experiencing some financial setbacks, Richard Patrick decided to maintain the name Filter, reassembled his band, replaced Walker (who left to work with The Smashing Pumpkins) with new drummer Steve Gillis, and finally released Title Of Record in 1999. Filter scored a huge Black Sheep Hit from this album in the more upbeat, acoustic-based “Take A Picture,” a song about Patrick drunkenly embarrassing himself on an airplane flight.

Inspired by the success of this song, Filter’s first single from the next album, The Amalgamut (2002) took the catchier approach of "Take A Picture" and amped the guitars Up to Eleven, resulting in “Where Do We Go From Here,” which almost matched the previous single’s success. Alan Bailey joined the band around this time as the new live guitarist, but the tour for The Amalgamut was aborted after Patrick entered rehab for his drug addiction. After becoming sober, Filter was put on the back burner in favor of Patrick’s side projects, The Damning Well and Army Of Anyone.

Filter finally resurfaced in 2008 with Anthems For The Damned, released on their new label, Pulse Records, which featured collaborations from Wes Borland, John 5, and drummer/rock journeyman Josh Freese. Filter’s return didn’t make waves like their '90s heyday, but the album met positive reviews, and the band, still having a frequently shifting lineup, persisted with three further albums, The Trouble With Angels (2010), The Sun Comes Out Tonight (2013) and Crazy Eyes (2016).

Despite Richard Patrick's history with Nine Inch Nails, the signature sound of Filter isn’t nearly as textured as Trent Reznor’s, retaining some industrial influences but favoring a more straightforward approach, with heavy rock riffs and occasional hints of psychedelia. Though that changed a bit on their 2016 album Crazy Eyes, showing more Industrial elements than anyone but Nine Inch Nails had in years.

Patrick reunited with Brian Liesegang in 2018, thanks to mutual friend Louise Post from Veruca Salt. Their reunion album was going be titled reBus, and was originally set to be released on PledgeMusic. Unfortunately, PledgeMusic collapsed in the middle of the campaign, leaving the album to be shelved, and Richard Patrick very unhappy. Patrick explained the situation on social media in July 2019, while also announcing that he's working on a new Filter album, They Got Us Right Where They Want Us, At Each Other’s Throats.