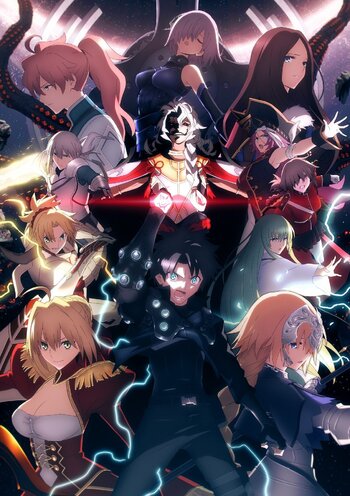 Fate/Grand Order - Final Singularity Grand Temple Of Time: Solomon is an anime movie based on the "Solomon" chapter from the mobile game Fate/Grand Order, and Immediate Sequel to Fate/Grand Order - Absolute Demonic Front: Babylonia picking up right where the series leaves off. It is produced by CloverWorks, who also produced Babylonia, directed by Toshifumi Akai, and written by Kinoko Nasu.

After battling their way through all seven Singularities, the Chaldea Security Organization has finally arrived at the endpoint of the Grand Order: The Final Singularity, Grand Temple of Time: Solomon. Now is the time to defeat the root of all evil, Solomon, the King of Mages. Now is the time to reclaim the future.With the final operation looming large, Romani Archaman considers the choices he will soon have to make, Mash Kyrielight dwells on life's limitations, and Fujimaru prepares to receive a new Mystic Code. All of their many encounters have led to this moment as Fujimaru and Mash at last embark on their final operation.

The film premiered in Japanese theaters on July 30, 2021 as part of the celebration for Fate/Grand Order's sixth anniversary and as the Grand Finale for the first part of Grand Order's story.