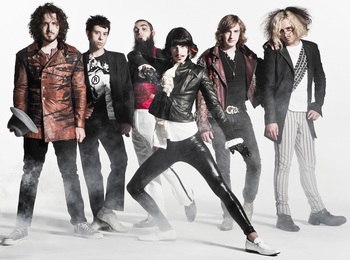 The self-appointed "Evel Knievel of Rock and Roll", Foxy Shazam is an American rock band from Cincinatti, Ohio identified primarily by over-the-top lyrics and a bombastic, theatrical stage presence best exemplified by totally fucking insane frontman Eric Nally, who is know for antics such as delivering grandiose monologues inbetween songs, pausing mid-lyric to drop to the ground and do pushups, and devouring handfuls of the audience's lit cigarettes.

Formed in 2003 under the name "Train of Thought", the band later changed their name to "Foxy Shazam!" and released their debut album in 2005, The Flamingo Trigger, a distinctively eclectic mix of baroque piano ballads, aggresive post-hardcore screaming about pissing in buttholes, and the occasional merry-go-round organ break. This would prove vastly different from their future work, but is still a remarkably entertaining album in its own right.

The band signed to independent record label Ferret Music and released Introducing Foxy Shazam in 2008. The album saw Foxy shedding their exclamation point along with their post-hardcore sensibilities (mostly) but keeping the piano and batshit theatrics to create a rock album as maniacally energetic as it is difficult to pin down categorically, and surely one of their best efforts.

The band jumped over to Sire Records in 2010 and released their self-titled third album, this time totally changing gears to a more pop rock sound. it was at this point that the band got a bit of exposure with their single "Unstoppable" being used in a few trailers and at none other than Super Bowl XLIV, though bassist Daisy Caplan later recalled that it didn't have a monumental effect on their popularity- "Mostly just people who already knew us were like 'What?'"

In 2012 the band signed to IRS Records and released The Church of Rock and Roll, which, mainly due to the influence of The Darkness's Justin Hawkins as a producer and co-songwriter, took on a sound that was so British it could easily pass a Queen album with more Soul textures. the song I Like It blew up and became their highest charting single to date, peaking at #5 on the Mainstream Rock Charts.

After jumping between three different record labels, the band decided to go independent once more and release their fifth album, Gonzo, online for free.

The album was yet another drastic departure from all of their previous work, axing the densely layered studio production and going for more of a lo-fi guerilla style where all of the songs were recorded with all of the band members in the same room at the same time, and usually on the first take, to emphasize songwriting over flair. the sound became more alternative and the lyrics became much less bombastic but not any less... weird.

Sadly, the band announced they were taking an indefinite hiatus in 2015 and each member left to pursue their own projects, with Nally teasing a possible solo album.

Luckily though, with Nally having delivered a show-stealing guest performance in Macklemore's "Downtown"

and Foxy retroactively garnering interest as a result, the band might have a significantly large fanbase waiting for them when they get back.