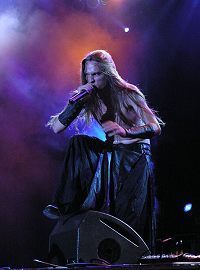 Finntroll is a Finnish Folk Metal band. Their music can most concisely be described as blackened death polka but they often branch out to include elements of music of the classical, punk, carnival, ambient, acoustic, and bluegrass varieties. The band's lyrical themes are generally based around trolls living in the forest, eating people, hanging out with wolves and witches, and partying around ancient mushrooms.

Originally started by founding members Katla and Somnium as a joke at a drunken party, Finntroll became a full-fledged band with connections to many prominent bands in the Finnish metal scene. They've released a demo, six albums, and two EP's since forming in 1998.