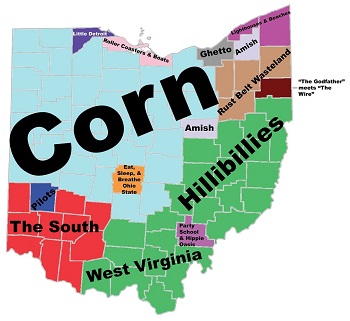 Not entirely accurate. They grow soy too! (large version

Ohio, the Buckeye State,note Named after a nut-bearing tree native to Ohio. The nuts are poisonous, but "buckeye candy

"—chocolate-covered balls of peanut butter—are a favorite local confection. is the seventh-most populous state in The United States, and is often stereotyped as socially-conservative farm country. This isn't a total lie—there is at least one working farm in all 88 counties—but it's not the whole truth either. Ohio is also one of the most heavily urbanized states in the country. With over 11 million people, it's the densest state outside the Atlantic coast. It has six cities of 100,000 or more; three of which—the "Big C's" Columbus, Cincinnati, and Cleveland—have metro areas in the millions. As such, Ohio is more diverse in people and belief than most outsiders realize.

Most of its major cities are known for their industrial base, with the notable exception of Columbus. Like elsewhere in the Great Lakes region, current major cities started as industrial towns that grew along trade routes and attracted job-seeking immigrants from all over. Irish, Germans, and African Americans are the largest ethnic groups in the state, and the major cities also house significant Eastern European, Hispanic, Asian, Middle Eastern, and AfricanFun Fact Columbus has the second-largest Somali-American community in the US (the Twin Cities are #1), thanks to refugee resettlement programs in the 90's populations as well. The strong presence of racial minorities and a long legacy of labor unions have given Ohio's urban and working-class suburban areas a Democratic lean, though Republicans perform strongly in the more well-off suburban and rural areas (although, like the rest of the country, the suburban coalitions began to invert around the 21st century). This combined with Ohio's size made it a battleground state during election seasons. Presidential candidates on both sides will make an effort to appeal to Ohio, and since the state has voted for the winning president all but three times (in 1944, 1960 and 2020) since 1896—the longest "winning streak" in the nation—this makes the political furor that much more intense. However, the state has become staunchly Republican in recent years due to the party's consolidation of working-class support.

Unfortunately, the state was hit hard when industrial and manufacturing companies left the Great Lakes region around the 1970s, and most of its cities except Columbus (more on that later) became Dying Towns and Wretched Hives overnight. The low employment led to high crime rates that the state still struggles to contain. However, The New '10s have seen some improvement in this regard, as the cities have been trying to base their economies around health care, education, finance, technology, etc.

After Virginia, Ohio is the state with the second most presidents born within its borders, with seven — all late-19th to early 20th century Republicans (Grant, Hayes, Garfield, Benjamin Harrison, McKinley, Taft, Harding),note An eighth (William Henry Harrison — Benjamin's grandfather) moved from Virginia. The younger Harrison, however, was raised in Indiana, and Grant was elected out of Illinois and is also the birthplace of Neil Armstrong, the first man to walk on the Moon. Other luminaries include fellow astronaut and long-time Democratic Senator John Glenn (the namesake of Columbus's airport), James Thurber, and a number of professional athletes, actors, and musicians. The United States Air Force maintains two bases in Ohio, one in Toledo and one in Dayton, the latter being where the 1998 Dayton Peace Accords were signed.

The state is generally divided into five regions:

People from Cleveland and Toledo (including their surrounding areas) can be found in those cities' pages.
People from Ohio

Works that feature Ohio (excluding works set in Cleveland since it has its own page):