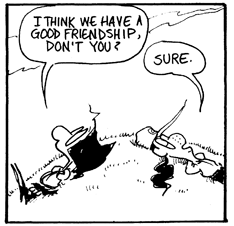 The titular Agnes and her best friend.
Advertisement:

Agnes is a comic strip by Tony Cochran about the titular girl who lives with her grandmother in an Ohio trailer park, "The People's Court". Agnes is poor and isn't probably what you would call "pretty" , however, she is a dreamer and schemer, whose imagination and ambitions are constantly brought down a few pegs by her small resources and position in society, not that she lets this stop her.