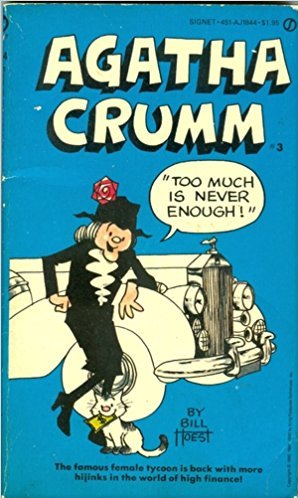 Agatha Crumm Book Cover
"Gold goes up as the dollar goes down."
— Agatha Crumm's version of the Golden Rule

Agatha Crumm was a newspaper comic strip by Bill Hoest (creator of The Lockhorns) published by King Features Syndicate. It debuted on October 24, 1977 and ended in 1996.

The title character, a little old lady named Agatha Crumm, was the head of her own cookie company, making all kinds of business deals and looking for ways to make more money. Her employees were largely incompetent, earning Agatha's wrath.

Joining Agatha in her escapades was her family: her son Junior, Junior's wife and Junior's impressionable daughter Bunny; two beautiful secretaries, Winsome and Harriet; Schneider, a Mad Scientist and researcher for Agatha, and physician Dr. Bernhang.

Three paperback books were published in The '80s collecting select Agatha Crumm comic strips. Full reprints have yet to be seen.