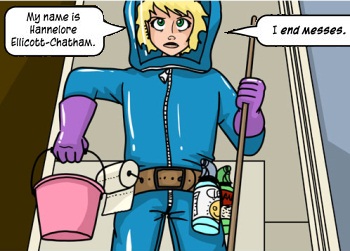 "Who robs a place, then tidies up and dusts the shelves before leaving?"
— Zib, Lackadaisy
Advertisement:

A character who has some sort of obsession with cleanliness as a character trait. It may be a sign of their dedication, obsessiveness, or perfectionism. Generally, they'll be one of the few main characters to complain about neatness unless someone ends up Covered in Gunge or something extremely messy.

This is stereotypical behavior for any character with obsessive-compulsive disorder (OCD). In older movies and shows, an obsession with cleanliness can be a metaphor for homosexuality in men. Women who are extremely tidy are usually shown as frigid neurotics who probably deny their husbands sex and their children unconditional love.

We all know at least one person like this.

For the opposite behavior see Men Can't Keep House, Trash of the Titans, and The Pig-Pen. See also Spring Cleaning Fever, Terrified of Germs.