Film / Yesterday Was a Lie 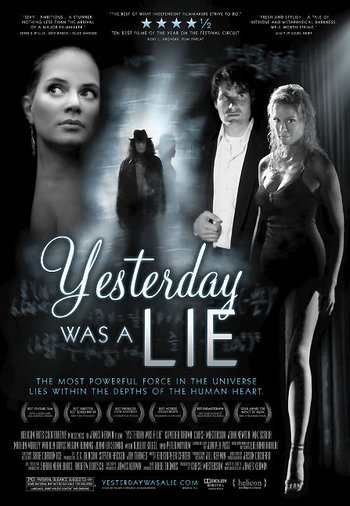 Yesterday Was a Lie is a 2009 science-fictional Film Noir homage by director/writer James Kerwin, starring Kipleigh Brown as Hoyle, and featuring former Star Trek actress Chase Masterson as a mysterious and significant — but nameless — lounge singer who becomes Hoyle's ally.

Hoyle is a hard-drinking private detective(?) searching for a missing scientist and a missing Nazi notebook, and instead uncovering mysteries about the nature of reality and time. Quantum mechanics, Jungian philosophy and fanservice all feature heavily. Peter Mayhew (aka Chewbacca from Star Wars) appears as a silent character called "Dead Man".

The movie spawned a short-lived web series in 2011.

The film contains examples of the following: