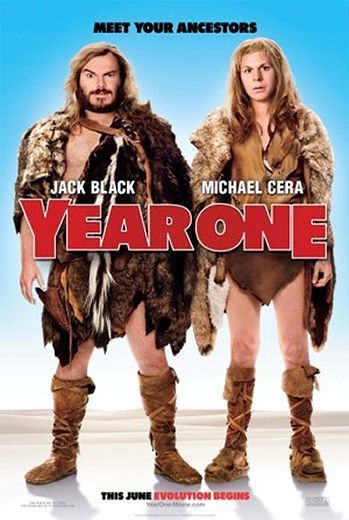 Zed: "What are these big round things?"
Cain: "They're wheels numbskull, they make the cart roll."
Zed: "Wow!"
Advertisement:

Year One is a 2009 comedy starring Jack Black and Michael Cera as a pair of weak hunter-gatherers in Ancient Rome who get caught up in a plot to rescue their tribe from the City of Sodom.

Zed (Black) and Oh (Cera) are would-be hunters who dream of becoming something more. After the duo are banished from their tribe (thanks to Zed eating from a tree of Forbidden Fruit), they embark upon a series of adventures, and run into various characters from The Bible (influencing historical events as a result). The two are eventually captured and brought as slaves to the City of Sodom, where they discover the women they once pined for, Maya and Eema, have also been enslaved, along with the rest of their tribe. It's up to Zed and Oh to rescue their tribe and become the heroes they were meant to be.

The film features a large amount of Anachronism Stew and features a wide assortment of noted comedic actors in bit parts, including Harold Ramis in both his final acting part and final film directed before his death.

Not to be confused with Batman: Year One.