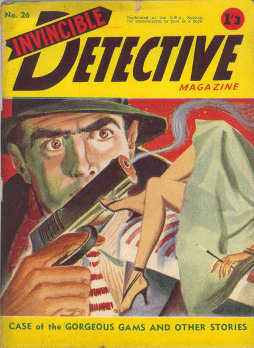 "I needed a drink, I needed a lot of life insurance, I needed a vacation, I needed a home in the country. What I had was a coat, a hat and a gun."
— Philip Marlowe, Farewell, My Lovely
Advertisement:

A tough, cynical guy with a gun and a lot of Street Smarts, who solves mysteries with dogged persistence rather than astounding insight, the Hardboiled Detective was America's Darker and Edgier response to the classic ideal of the Great Detective.

Anything but clueless, the hardboiled detective is generally a Knight in Sour Armor or even an Anti-Hero who lives in a world of Black-and-Gray Morality. He's a Private Detective or Amateur Sleuth — usually the former. His services are required because the police are useless, corrupt or both, so he'll never be a cop, though he may be a retired one. Expect him to keep a bottle of scotch in his desk, which is probably located in an office in the low rent district. Recent depictions typically include the trademark trenchcoat and fedora over a rumpled suit, made popular by Humphrey Bogart.

Originating in the early part of the 20th century, hardboiled detective stories quickly became a major subgenre of Mystery Fiction. Later, they became strongly associated with Film Noir. Raymond Chandler is considered the master of the genre, but it was Humphrey Bogart's depiction of detective Sam Spade in the 1941 film, The Maltese Falcon (based on a novel by Dashiell Hammett), that became the Trope Codifier.

By the 1960s, the hardboiled detective had nearly become a Dead Horse Trope, but continuing interest in Film Noir kept it from the brink of extinction. Today it is most often seen in parodies and genre crossovers (the Hardboiled Detective In SPACE!!), but can still be played straight in Noir revival or homage. The style, language, and fashion of the hard-boiled detective tend to remain solidly anchored in the 1930s and 1940s, though, no matter where he appears. Expect him to call his gun a "gat", to refer to women as "dames" and their legs as "gams".