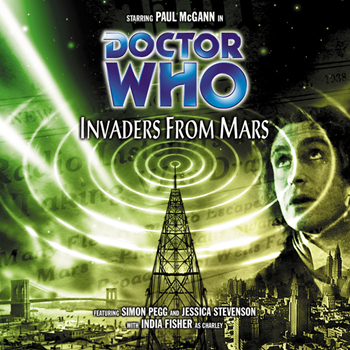 The Eighth Doctor and Charley pop up on October 30, 1938, just in time for Orson Welles' legendary radio adaptation of H. G. Wells' The War of the Worlds. Orson himself isn't particularly excited about doing the show, but he does his job and hopes for the best.

Charley is still hoping to get to that rooftop in Singapore in 1930, but the TARDIS isn't cooperating very much. She also soon finds a corpse, belonging to a detective. The Doctor's first instinct is to take on the detective's identity, put his feet on the guy's desk and take on the case of the first distressed dame that walks into his office. This earns him a rather confused What the Hell, Hero? from Charley, and he reluctantly agrees to stop playing around and start saving the day. As it turns out, this particular day needs saving from mobsters with ray guns. They've kidnapped a professor who specialises in atomic power, as well as a crash-landed alien. And they're planning on selling what they found to the highest bidder — the USA, or Mother Russia, or the Nazis.

The mobsters are happily listening to Welles' reading of The War of the Worlds, and are therefore a bit confused when actual space mafia aliens appear to come pick up their crashed friend. Said friend is also spawning a nest of giant alien baby bats.

Welles is plain exasperated when people across the USA confuse his radio drama for an actual alien invasion. But this gives the Doctor an idea: he teams up with Welles to stage a second radio drama, tuned to the aliens' frequency, to convince them that Martians beat them to Earth and will kill them all. This works marvelously until the Doctor can't resist the urge to play the part of the angry evil Martians himself. He immediately proceeds to cock it up by asking how he's doing while his mic is still on.

In the end, though, the aforementioned kidnapped professor saves the day.

As for all those continuity errors, and why Orson Welles can't quote from Hamlet...