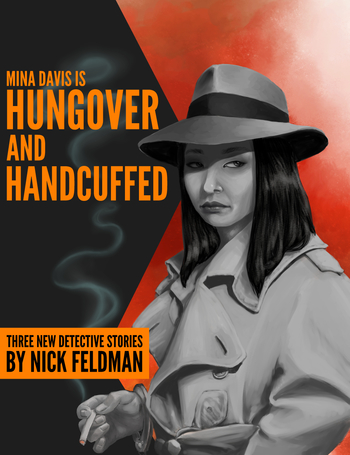 "The worst part of being a pessimist is that you’re almost always right."
Hungover and Handcuffed by Nick Feldman is the first Mina Davis book, a series of three (or four, if you count the linked online bonus story) short stories introducing Mina, a hardboiled private eye based out of Seattle, WA. Despite opening on a pretty graphic torture scene, it's generally regarded as a progressive, feminist take on traditional crime fiction tropes, and is occasionally taught in collegiate literature classes for that reason.
Advertisement:

The titular story, and the first one in the collection, chronicles Mina's run-in with a serial killer named Jack Darwin.

The second story, "Matamoros," follows Mina's attempts to foil an assassination by the title character.

In "Marty," the third story, Mina is summoned by an old friend who fears someone is coming to kill him.

The online bonus story, "Get Tough," details Mina's first adventure through the frame of her being interrogated it after the fact by the local police.

Hungover and Handcuffed is followed by a second book, Asshole Yakuza Boyfriend. A third book is due out in 2016.

Hungover and Handcuffed is available here

, or you can start with "Get Tough" here

Hungover and Handcuffed provides examples of the following tropes: