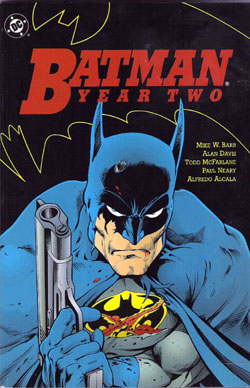 One year and you end up giving into using a gun.
"Enough! If I must kill the guilty to save the innocent, then I will kill!"
— Karn, Magic: The Gathering

So you've got a hero. He's a really good hero, and he has rules (heroes often do, after all). Let's say, hypothetically, that one of those rules is that he'll never use a gun. Maybe his parents were brutally murdered in front of him with one, spurring him into heroism in the first place. Whatever. The guy doesn't use guns.

Then something bad happens. The stakes go up. Maybe a villain bent on bringing about universal entropy arrives. The hero's pushed to his absolute limit. The world, even the universe, is hanging in the balance. There's only one way to put things right. The hero picks up the weapon...

Batman's got a gun.

This trope isn't just a hero doing something they wouldn't normally do. It's a hero doing something they're fundamentally against doing or have sworn that they would never do. If they've done it before (at least in that continuity), it isn't this trope. It's also not this trope if they almost break their rule but then don't; Batman and the Doctor particularly have a bad habit of almost breaking their rule, or breaking their rule in a hallucination/alternate timeline/dream sequence, or breaking it under some version of brainwashing or mind control… none of which is this trope. For it to truly count as Batman Grabs a Gun, it must be a moment where hero breaks their golden rule, on purpose, in the real world version of their continuity.

Happens most frequently to the Retired Badass, Knight in Shining Armor, or Invincible Hero, often during a What You Are in the Dark moment. Contrast the Frequently-Broken Unbreakable Vow. Can, and often does, overlap with Let's Get Dangerous!, Big Damn Heroes, O.O.C. Is Serious Business, and/or Despair Event Horizon. It's a kind of Godzilla Threshold. Pretty much always results in an Oh, Crap! moment for the villain. Can be a Moment of Awesome, but it will always be Played for Drama.

When adding examples, please be sure to mention for the sake of clarity what the rule is that's being broken. Also, please don't bother with examples of almost breaking their rule; characters who have a prominent rule tend to frequently be pushed/tempted/pressured to break it, but it's only this trope if and when they actually do. Otherwise, every fifth Joker story would count, as would about fifty Doctor Who episodes. This trope is about the first time the rule is broken (though of course with alternate continuities and such a character might have more than one "first" time breaking their vow), not subsequent breaks or near misses.

Named for Batman's use of a gun during Grant Morrison's Final Crisis.