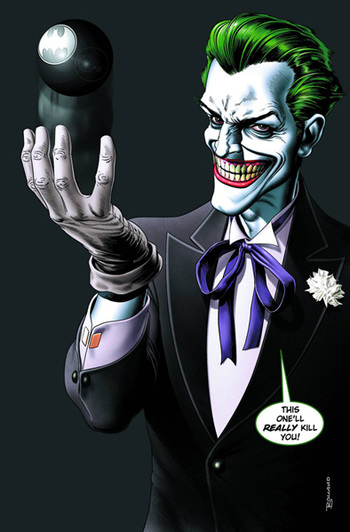 The Joker: This one'll really kill you!
Advertisement:

The Joker's Last Laugh, sometimes simply called The Last Laugh, was a Crisis Crossover DC Comics published in 2001. It was written by Chuck Dixon and Scott Beaty.

In the story, the Joker is told he is dying of an inoperable brain tumor shortly after arriving at the villain prison known as The Slab. He quickly decides to go out with a bang and infects all the other inmates with an insanity virus that also puts them under his control and stages a mass breakout, tossing the prison into another dimension as he does. While the Batfamily and Justice League scramble to contain his malice, the survivors at The Slab work to return it to Earth and world governments panic in fear of the clown's wrath.

But could this really be it for the clown prince of crime?

Tropes for Joker's Last Laugh include: