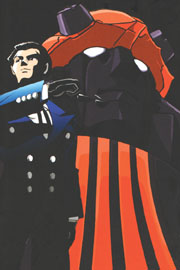 BIG O! SHOWTIME!!!
"Cast in the name of God, ye not guilty."
Advertisement:

Paradigm City is a strange metropolis that seems to be a cross between a Film Noir New York and a City of the Future. Forty years ago, its inhabitants were struck by a mysterious case of amnesia that robbed them of their past and sense of self. Yet life continues on, and the people of Paradigm City have adapted to their new lives without a history.

Roger Smith is a "negotiator" living in Paradigm City: part-Private Detective, part-professional go-between. Roger is one of the most trusted and well-paid men in his field. Yet if negotiations break down or a disaster threatens the peace of the city, he has one hell of an ace up his sleeve: the "Big O", a titanic battle robot officially classified as a "megadeus".

After forty years, something is causing the secrets buried within Paradigm to break through to the surface. With the aid of an eclectic group of characters, Roger must fight to protect the people of Paradigm against all manner of monstrous threats while pursuing the truth within the city's lost history.

The Big O was created by Sunrise studios and premiered in Japan in October 1999. Though originally planned as a 26-episode series, low viewership in Japan meant that production ceased after only 13 had been completed. The series fared better internationally, however, where it received a very positive reception after airing on Cartoon Network in April 2001. This caught the network's attention and as a result they offered Sunrise and Bandai Visual to join as co-producers on a second season, consisting of the 13 unproduced episodes, which started airing in Japan in January 2003 and in August that year the US.

The second season began airing on the revived Toonami block on July 27th of 2013, airing at 3:30 AM and joining the lineup alongside Sword Art Online. Due to its role in funding the anime's revival, Cartoon Network (indefinitely) holds exclusive airing rights to the second season.

As of 2013, both seasons of The Big O are licensed in the United States by Sentai Filmworks.

The series can be described as a Western radio serial done from the perspective of the Japanese. There is a very Japanese cultural perspective here, in that wherever Roger goes in his investigation of the Monster of the Week, the people he talks to always think it is "a god". Anything strange or inexplicable is attributed to the gods. There's a reason each of the giant robots is explicitly referred to as a "Megadeus". At the same time, strong Western elements like Paradigm City's Art Deco visual style or the characters all dressing in fashion from America of the 1950's and 60's abound. These elements contrast each other heavily and provide an intriguing atmosphere and setup, which comes to fruition as the story shifts from a Monster of the Week format to a much more cerebral story about identity, loss, memory, and love.

Now with a Recap Page.

Try not to mistake the sixth DVD, "The Big O: Missing Pieces" for Shel Silverstein's book The Missing Piece Meets the Big O.

The name actually seems to be one of the many religious references (like "Behemoth" and "Leviathan") that appear in the show, in this case to "Alpha and Omega" - the name of the Greek letter "Omega" (O-Mega) literally means "Big O", in contrast with "Omicron" (O-Micron), which means "little O".

As Alan Gabriel (who has hardwired himself onto Big Duo) goes for the killing blow on Roger Smith, his Megadeus suddenly stops. Shortly afterwards, the spirit of Schwarzwald appears in front of him and repossesses his Megadeus. Deeming him unworthy of piloting it, Big Duo rejects Alan, as shown with the words "YE GUILTY", and consumes him.

As Alan Gabriel (who has hardwired himself onto Big Duo) goes for the killing blow on Roger Smith, his Megadeus suddenly stops. Shortly afterwards, the spirit of Schwarzwald appears in front of him and repossesses his Megadeus. Deeming him unworthy of piloting it, Big Duo rejects Alan, as shown with the words "YE GUILTY", and consumes him.