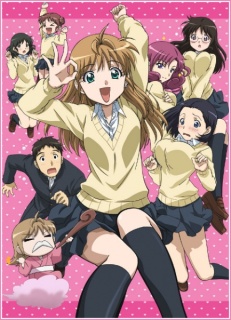 B Gata H Kei (B型H系 Bī Gata Etchi Kei) is an ecchi Romantic Comedy four-panel manga series by Yoko Sanri. It was published by Shueisha and ran in Weekly Young Jump from 2004-2011.

The story focuses on Yamada (no first name available), the self-described "epitome of B-type H-ism".note  The title literally means 'B-type, H-style' or 'B-type, H-model', with "B" referring to her chest size and "H" being the Japanese code-letter for sex, so idiomatically this means 'B-cup girl is sex-crazy'. She's entering her first year of high school, and decides on a goal for herself: to have 100 casual sex partners. Considering that she's a virgin and rather clueless about dealing with the opposite sex, how she's actually going to do that is a mystery. On her first day, she runs into Takashi Kosuda, a teenage loser who happens to be in her class and also to be a virgin. She decides to make him her first conquest and clumsily pursues him, thus beginning an awkward storm of romantic hijinks.

Along the way, Yamada and her friends are assisted by their eros deities, manifestations of their sexual desires and perverse consciences that also serve as narrators, being the only characters who are allowed to talk to the viewer. All of the eros deities resemble their associated characters - with some odd additions (see character page)

B Gata H Kei received an anime adaptation by Hal Film Maker in the spring of 2010, which roughly adapts the first 50% to 60% of the original story. Funimation has licensed the anime under the name B Gata H Kei: Yamada's First Time.

Note: All character tropes go to the character page.