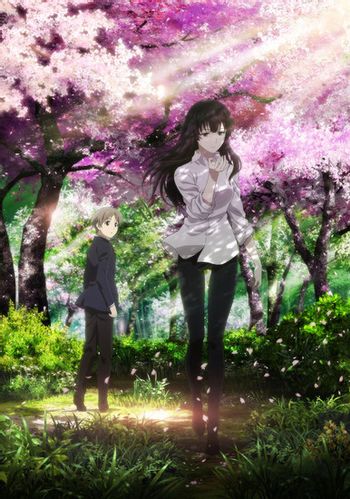 The relationship between the two... is a little bit complicated.
"A story dedicated to those trapped in the past."
— Exposition for the novel series.
Advertisement:

Beautiful Bones: Sakurako's Investigation or its Japanese title, Sakurako-san no Ashimoto Ni Wa Shitai Ga Umatteiru (Literally translated as "A Corpse is Buried Under Sakurako's Feet), is a novel written by Shiori Ōta with illustrations done by Tetsuo. It is released in Japan only by Kadokawa Shoten since 2013. 8 volumes are out to this date.

An anime adaptation has aired on October 7, 2015 in Japan under its Fall 2015 Anime lineup with animation done by TROYCA, with 12 episodes aired. Crunchyroll streams the show in English-speaking territories while Anime Digital Network streams it for French-speaking territories. A radio drama briefly aired online and is still available for download

. A manga adaptation is currently ongoing. A live-action adaptation has aired in April 2017 under Fuji TV.

The series center on a high school student named Shōtarō Tatewaki, who lives in the city of Asahikawa in Hokkaido Prefecture. One day, he meets a young woman named Sakurako Kujō, the daughter of the prominent Kujō family as an osteologist who has a fascination with skeletal remains. In her free time, she uses her osteology skills to help the Hokkaido Prefectural Police in solving crime, thanks to the skills she learned from her uncle, who was an ex-HPP forensic scientist. Because of this, Shōtarō gets tagged along from case to case where he assist Sakurako while making sure she doesn't make things difficult for him or get in trouble with the prefectural police.

The series is licensed to Sentai Filmworks for release in North America.

There's an effort to get the novels translated in English

since it's not available outside Japan.