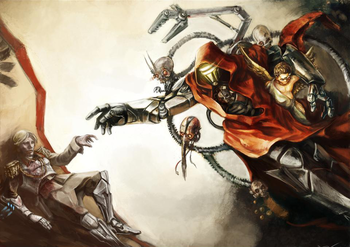 "Never forget I am not this silver body, Mahrai. I am not an animal brain, I am not even some attempt to produce an AI through software running on a computer. I am a Culture Mind. We are close to gods, and on the far side."
— The Mind of Lasting Damage, Look to Windward
Advertisement:

Even though A.I. Is a Crapshoot, the more powerful the AI becomes, the likelier it is to choose to help you instead of just kill you. Depending on the setting, this help can range from establishing a true Utopia, a Mary Suetopia, a false utopia or even a Dystopia if it's so inclined.

Customarily, when you can think faster than the speed of light it becomes trivial to prove Reed Richards Is Useless wrong and find solutions to hunger, hate, and happiness with surprising ease. Usually the calculator god sees it as so easy to make our lives paradise it says "What the hell, I'll kill a few calculation cycles now that I've done everything else".

Of course, authors love to subvert the above with the AI either playing god, or becoming insanely evil as the Super Intelligence makes them into a Master Computer bent on enslaving humanity. Basically, if The Smart Guy is a Jerkass because his intelligence makes it hard to be happy, multiply that by a scagillion for the AI. Then again, "power corrupts" seems to apply equally to AIs and humans. Or maybe its idea of "help" is somewhat contrary to our desires, or contrary to what is actually beneficial for us. Or, perhaps most mundanely, it may treat us with as much compassion as we treat almost every "lower" form of life on the planet.

If it is humanity who decides the machine is the god, see Machine Worship. A sufficiently powerful AI will think Prescience Is Predictable.

PS: For those who didn't get it, the name of this trope is Latin for "God is the machine". Not to be confused with Deus ex Machina, which means "God out of the Machine".

Alternative Title(s): A God Am AI