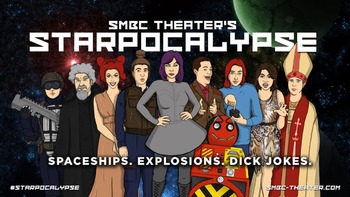 Starpocalypse is a 2013 web video created and written by James Ashby and Zachary Weiner, known for their work on SMBC Theater and the webcomic Saturday Morning Breakfast Cereal. It follows two brothers, Niac and Leba, who are fired from their university and use Leba's "finder" technology to find a reason for them to be hirable...leading them to find the ship the Space Pope vowed to find God with when he left a millenium prior. And he succeeded.

The series is the science vs religion conflict taken to its most ridiculous extreme. The only religious character is the "Space Pope", who is dead by the events of the series and considered an idiot by many. God is a deranged monster who kills humans for fun, and had nothing to do with any positive aspects of religion. Meanwhile, the science-revering humans are decadent morons, have no regard for history, art, literature, etc, instead doing nothing but artificially giving themselves orgasms.

You can purchase and watch it here