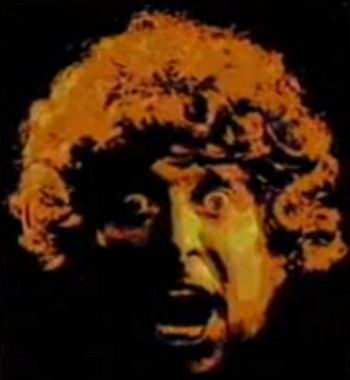 There's a reason this is called the Face of Evil...
Leela: The Evil One!
The Doctor: Well, nobody's perfect, but that's overstating it a little.
Advertisement:

The one where the Doctor threatens a man with a Jelly Baby and briefly tries strong-arming the camera man into being his new friend.

The TARDIS arrives on a planet where the primitive native tribe known as the Sevateem immediately identify him as "The Evil One", and worship a God called Xoanon. They've got a point, seeing as there's a giant invisible floating Tom Baker face terrorising them, and there's an even bigger Tom Baker face carved into the nearby mountains. A young female warrior called Leela, meanwhile, has some issues with the existence of Xoanon, and faces a trial for heresy. Her father decides to take the trial instead, and promptly dies just a couple of minutes into the serial.

Leela, now Conveniently an Orphan, is forced to leave the tribe and runs into the Doctor (who deduces that the TARDIS probably hasn't landed him in Hyde Park after all). After both are captured by the Sevateem again a few times over, she shows the Doctor the image of the Evil One — his own face carved into the side of a mountain. The Doctor tries to convey that the tribe's "sacred relics" are bits of space suits and defunct spaceship parts, and that the Sevateem are just a group of humans descended from a crashed explorer ship. Leela won't have it, and the local Large Ham priest, Neeva, suffers a bit of a religious breakdown because of it.

The Doctor investigates further (into the giant statue's mouth, to be exact), and discovers that Xoanon is really a ship's supercomputer. A long time ago, he tried to repair it when it went haywire, by linking it to his own brain and connecting it with the relevant data in there. (The official 70's novelisation states that he did it during "Robot", when he popped into the TARDIS for a while.) But the computer wasn't broken at all — it had achieved sentience, and its consciousness had just been born. The newborn computer-creature went "schizophrenic" due to being linked to the Doctor's mind, and developed a second personality: that of the Doctor. With the two personalities fighting for dominance, the ship crashed, and Xoanon decided to trap its survivors in a large-scale eugenics experiment. The Survey Team, which explored the planet, were modified to show strength and courage and became the Sevateem; the Tech Team became the (now legendary) Tesh, granted cold reason and psychic ability by Xoanon. Generations later, both parties have now fallen to Cargo Cult superstition, allowing Xoanon to rule as a God for both.

The Doctor, Leela and Neeva (who very quickly catches on, surprises the Doctor with his intelligence and makes a Heel–Face Turn) manage to access Xoanon's memory banks, after running the gauntlet of traps and mazes set both by the Tesh and Xoanon himself. They erase the Doctor part of Xoanon's multiple personalities, leaving the computer sane once more. Leela is promptly elected as the leader of both tribes. Much like the Doctor in the previous story, she's not remotely interested in becoming president of anything, and she runs off to become a companion instead. Despite the Doctor's protests.