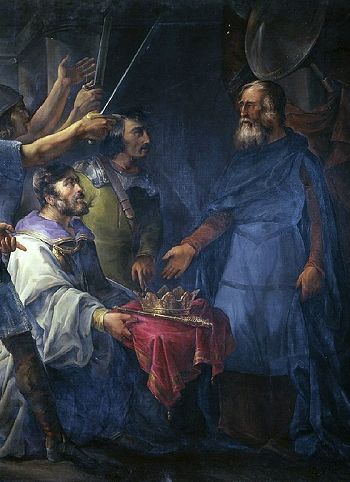 This. To wear over your head.
Worf: What I have done was for the Empire. A new day must dawn for our people. I am not the man to usher in that day. But there is a man here who can.
Martok: Worf, I do not seek the leadership.
Worf: Kahless said, "Great men do not seek power... they have power thrust upon them."
[Worf hands the Chancellor's robes to Martok]
Worf: Hail Martok, leader of the Empire! Leader of destiny!
— Star Trek: Deep Space Nine, "Tacking Into The Wind"
Advertisement:

A character is offered the crown of a kingdom that he has not inherited through a normal line of succession, even if he has Royal Blood. A kingdom may be an Elective Monarchy and normally select their kings rather than have them inherit. Others resort to it when the last line become extinct, or is deposed, or when there is no previously existing line of succession (in a newly independent country or a country that is replacing some other form of government with a monarchy).

Frequently a culmination of A Protagonist Shall Lead Them, if the character was not heir to the throne. Leads to an Awesome Moment of Crowning often enough, though he may refuse and make it stick. (Some reluctance is usually considered becoming.) In contrast to Standard Hero Reward, there is no bride, and usually there is no king already, so the character becomes the monarch, not the heir.

Contrast Unexpected Successor, where the rules just lead to someone unusual, and the Rightful King Returns. If the character is offered the crown because he possesses a specific MacGuffin, that's Finders Rulers. May be a Cincinnatus when the government becomes a republic after the character refuses the crown. If the villain offers the hero this, it is often We Can Rule Together. Sometimes results from the assumption that Heroism Equals Job Qualification. If successful, it usually results in a Reluctant Ruler.

See also Easily Elected, when a person somehow manages to get the position of power despite not having the qualification to run for the office.

The prospect of this can lead to a Succession Crisis as nobles intrigue about whom to offer it to. And it has not always settled the matter.