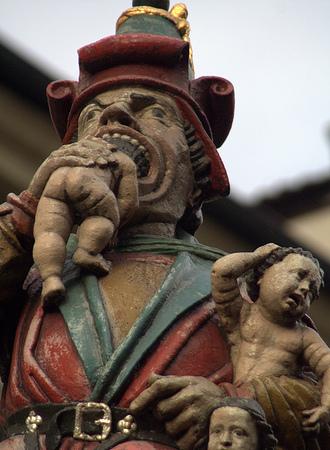 I want my baby back, baby back, baby back, baby back ribs.note From the Kindlifresserbrunnen in Bern, Switzerland.
"I have been assured by a very knowing American of my Acquaintance in London; that a young healthy Child, well nursed, is, at a Year old, a most delicious, nourishing, and wholesome Food; whether Stewed, Roasted, Baked, or Boiled; and, I make no doubt, that it will equally serve in a Fricasie, or Ragoust."
— Jonathan Swift, A Modest Proposal
Advertisement:

A villain/overlord so evil that they literally eat babies.

This is often used as an indication that a character is well beyond the Moral Event Horizon. Can be Played for Laughs, given the sheer over-the-topness that the accusation of "baby eating" usually invokes, but can also be Played for Drama (or for sheer Squick).

This is a subtrope of I'm a Humanitarian as well as of Would Hurt a Child. Also compare Exotic Entree. If the villain specifically targets babies, rather than just being repugnant enough to eat one if the chance comes up, then they're a Child Eater as well. If the villain, especially an animal villain, eats a baby that is inside an egg, then it's Evil Egg Eater.

If this trope is invoked to test a potential Baddie's moral fiber (or lack thereof) it's If You're So Evil, Eat This Kitten!.

There is a word in the English language - Brephophagist - specifically meaning "one who eats babies".

SpongeBob decides to let Larry keep the baby worms, not realizing he sees them as a use of protein and nearly devours them whole.

SpongeBob decides to let Larry keep the baby worms, not realizing he sees them as a use of protein and nearly devours them whole.