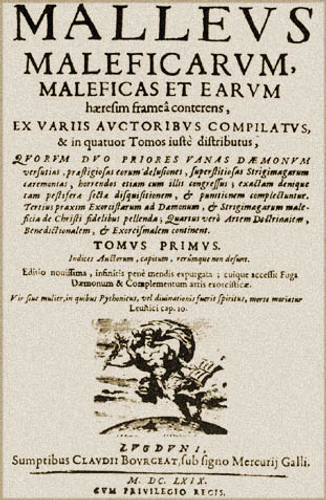 Judge Claude Frollo WISHES he had what this guy had!
— Red, stating her opinion on the author
Advertisement:

The Malleus Maleficarum (The Hammer of the Witches) is a witch-hunting manual written in 1486 by Heinrich Kramer, an Inquisitor of the Catholic Church, and first published in Germany, where it is known as Der Hexenhammer, in 1487. Jacob Sprenger's name is also attached to the book, though it is unclear if he did anything more than endorse it. The work also has an alleged approval and endorsement from a prestigious German university of the time, an endorsement that was very likely forged by Kramer. The book is virulently misogynistic, though it acknowledges that both men and women can be witches. It encouraged the use of torture to extract confessions in ways that were not actually legal under the laws of the Inquisition.

The chief crimes witches are accused of in the Malleus Maleficarum are the working of evil magic and making a Deal with the Devil in order to obtain this power. Women are, of course, more susceptible to The Devil due to their more carnal nature. Oddly enough, some of the most frequent crimes these sex-crazed sirens are accused of is stealing men's penises and causing impotency. Baby-killing and cannibalism were also apparently popular witch practices, often together.

Although some writers have claimed that the book was pretty much the cornerstone of the major anti-witchcraft movement and inquisitors and priests all over Europe had a copy, and thus is associated with the image of the Inquisition being a torture-fest, it's Dated History and it is not regarded to be nearly as officially endorsed as once thought. The book's author initially did have the support of Pope Innocent VIII in his bull Summis desiderantes affectibus, but the resultant manual fell out of a favor three years after it was first published, being then officially banned by the Catholic Church due to its perceived excesses. As of the mid-1600s it was included

in the Index Librorum Prohibitorum, turning the very act of reading it into a sin for a good Catholic. Most theologians of Kramer's time condemned the book for recommending unethical and even outright illegal procedures, as well for being inconsistent with established Christian dogma on demonology, while the various Inquisitions had higher standards for evidence and ethics (the Inquisition established the modern Inquisitorial system

used today) than the book proposed. However, it had conversely a strong effect in laymen, who neither knew nor cared much about theological affairs, and by 1669 it was still being printed at its 36th edition, with a very tangible presence in both Catholic and Protestant witch hunts.

It should be also said that the Malleus wasn't truly seminal by the time it was written. The witch-hunting ideas spoused in its pages had been already made popular in treatises like Johannes Nider's Formicarius (1435) and Alonso de Espina's Fortalitium Fidei (1458), so Kramer actually only followed the trend with more enthusiasm. This current of thought had never been given a lot of credit, as witchcraft was not something the Church fathers were especially interested in prosecuting (the prevalent view since AD 900 was that witchcraft was not real and that practitioners were instead heretics deluded by the Devil into believing they manifested arcane powers, therefore most punishments were light, either penances given in Confession, a spell in the city stocks, or at worst excommunication). However, the Malleus would have the effect of re-popularizing all those doctrines, which, combined with the Church's awkward silence about it in the Council of Trent, effectively caused a snowball of similar works, among them those of Jean Bodin, Nicholas Rémy, and Benedict Carpzov, thus really influencing the general thought. Notorious witch hunter Matthew Hopkins and his book, The Discovery of Witches, would become the spiritual successor to the Malleus, and bring the witch-craze to the New England colonies, with the Salem Witch Trials using Hopkins's methodology.

Tropes related to this book: