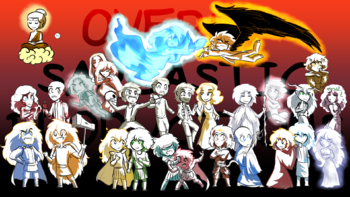 This isn't even an eighth of the people they've talked about.
Red: Hi, I'm Red.
Blue: And I'm Blue.
Red: And we make videos about boring nerd books.
Blue: And history.
Red: Don't worry, we make it fun.
Blue: That way you actually remember it.
— An apt summarisation of the channel and its owners.

Started in late 2012 with a summary of William Shakespeare's Much Ado About Nothing, this YouTube channel wants you to learn one thing and one thing only: learning isn't scary.

There are two people currently involved with the channel: Red, a passionate lover of books, and Blue, a lover of history. Together, they aim to not only educate viewers on the plots of classic novels and the summary of important points in history, but also inform you why you should care about such seemingly trivial matters in your everyday life. The series itself uses that of Limited animation, in which they're animatics throughout the series.

Red also writes a webcomic that can be found here

By popular demand, they also launched the Overly Sarcastic Podcast in late October 2020, and release new episodes roughly every fortnight. It mostly consists of Red and Blue discussing past and future episodes on the channel, current events/media, and so on, with occasional commentary from Indigo, and a Q&A section answering questions from the fans.

Red describes this trope and all its side effects and why it happens a lot to powerhouse characters.

Example of:
The Worf Effect

Red describes this trope and all its side effects and why it happens a lot to powerhouse characters.