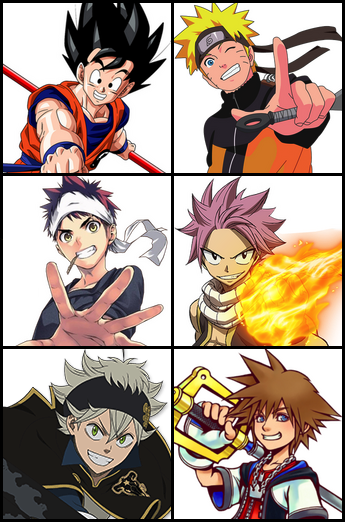 "I'm gonna become the best martial artist / ninja / chef / wizard / magic knight / Keyblade master ever! I'll show you!"
"Every challenge along the way, with courage I will face...
I will battle every day to claim my rightful place!
Come with me, the time is right, there's no better team...
Arm and arm, we'll win the fight, it's always been our dream!"
— The second verse to "Pokémon Theme"
Advertisement:

After the massive genre-defining, global, and still ongoing success of Dragon Ball, its hero Son Goku quickly became the codifier for a wave of young male spiky-haired heroes in Shonen shows around the world. Goku himself is an expy of the Monkey King, Sun Wukong.

Most franchises will start with a big-hearted, energetic Kid Hero. Intellectually, he's nothing to write home about, but this average simple-minded boy is actually a cunning genius when it comes to the Serious Business of choice. He's got a natural gift that blows others out of the water. On the rare occasion he loses, he'll train so hard that he catches up to and outsmarts masters of the craft one after the other.

He takes pride in his strength, but his true power comes from his friends. Don't pick a fight with him, or anyone he cares about, because he never gives up and will find a way to beat you.

For as strong he is physically, he's got an equally strong sense of justice (often in those exact terms on official bios). He'll go out of his way to help complete strangers, sometimes show mercy on his enemies, and always stand up and speak out for what's right.

The simpleness of the trope allows for endless kinds of age-appropriate stories about growing up, making friends, overcoming rivals and occasionally befriending them, getting acknowledged for winning, being determined enough to work through your failings, and generally being a good person. All subjects that hit home with the target audience.

An encompassing trope that's usually some combination of Book Dumb, Hot-Blooded, Idiot Hero, The Gift, Unskilled, but Strong, Training from Hell, Instant Expert, The Determinator, Time to Unlock More True Potential, The Power of Friendship, All-Loving Hero, To Be a Master. Often tends to be a Big Eater, again harkening back to the trope codifier, Son Goku. He is usually Oblivious to Love if not an outright Chaste Hero, though it is common that he experiences a Last-Minute Hookup at the end of the series. If he is not Oblivious to Love, he may be a Dogged Nice Guy who is comically rejected by most girls or have Single-Target Sexuality for the female lead. May also include aesthetic tropes like spiky Shonen Hair, Primary-Color Champion (leaning more towards Red (or increasingly Orange) is Heroic), using elements like Pure Energy, the vigor of Fire, or free-spirited Wind. Since these guys tend to have Heroic Builds or otherwise be drawn in an attractive way, he may or may not also be a Mr. Fanservice in real life; either way, expect Hollywood Homely to be in play and for most female characters to find him unremarkable in comparison to his Stock Shōnen Rival, a la Naruto. Following Goku's example, the character is very likely to have Cross-Dressing Voices (an adult woman affecting the voice of a preteen/teenage boy) in Japanese versions; in English and other dubs, this is less common, but can still be seen in characters like Ash Ketchum, Luffy, and Naruto.

A nearly Omnipresent Trope in the genre as of the late '80s and beyond. See also Japanese Spirit. Compare its companion trope, the Stock Light-Novel Hero and contrast with its genre Distaff Counterpart, Stock Shoujo Heroine, who is also Book Dumb and friendship-oriented but is usually not as Hot-Blooded.

Naturally, this trope goes hand in hand with the Stock Shōnen Rival, the most common type of Foil for this archetype.

An amnesiac young girl who wakes up with no memories as she falls to Hekseville. There, she meets Dusty, a strange black cat that gives her gravity-shifting powers. She quickly embraces a superhero role within the city of Hekseville as a gravity shifter. Her adventures eventually take her to the ends of the world, where she is allowed glimpses of her clouded past.

An amnesiac young girl who wakes up with no memories as she falls to Hekseville. There, she meets Dusty, a strange black cat that gives her gravity-shifting powers. She quickly embraces a superhero role within the city of Hekseville as a gravity shifter. Her adventures eventually take her to the ends of the world, where she is allowed glimpses of her clouded past.