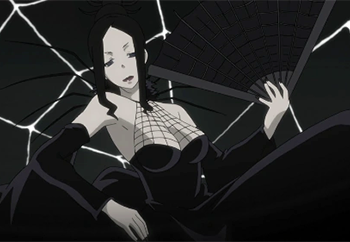 Be careful, or she'll tangle you up in metaphorical and literal webs.
Advertisement:

This Animal Motif is when a character consciously themes themselves, their behavior and even their home around spiders, though they might only do one or two of the above. Though they may have an Astonishingly Appropriate Appearance with long, thin limbs and a round belly, a rail thin and tall physique is the norm. Spider ladies are usually hourglass shaped, and regardless of gender or build almost always have black hair and pale skin.

They'll wear a lot of black, sometimes with red or white accents, lots of gauzy material, use web patterns, and generally either dress very fashionably in well tailored suits and dresses or go for Awesome Anachronistic Apparel with a whiff of decay. Villains enjoy High Collar of Doom and skintight Hell-Bent for Leather, though not necessarily at the same time. Personality wise they are usually territorial, sexually predatory (sometimes to the point of aptly being a Black Widow), and good at intrigue. On the more positive side, they can also be intelligent, patient, stoic, kind (this one is rare though) and creative, (they may be good at weaving either literally or metaphorically). Of course Dark Is Not Evil and they may just have a case of Freaky Fashion, Mild Mind; good spider people can be nice, but regardless of morality, spider-themed characters can usually be creepy with very little effort.

Spider powers optional, but usually include Super Strength, Not Quite Flight augmented with In a Single Bound, shooting webs and being a Poisonous Person. Sneaky Spider can also be in play if they are characterized as manipulative or cunning. Theme Naming and Meaningful Name recommended. Spider puns less so.

If combined with Beast Man and/or Shapeshifting, the motif can become far more literal, as with Spider People.

Though it is more often applied for spiders, sometimes other orders in the arachnid class such as scorpions get outfits.