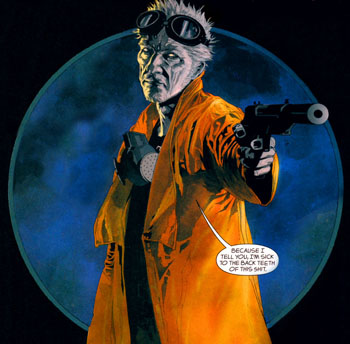 Desolation Jones is the title character of a 2005 comic book by Warren Ellis. Michael Jones is a former MI6 agent who was driven to drink by the stresses of the job. Useless as an agent, he was entered into the 'Desolation Test', an experimental procedure of which he is the only survivor. Among many interesting hinted at effects, he claims the test destroyed his ability to feel emotion. But that was a long time ago.

Now he lives in Los Angeles, a safezone and prison for former members of the intelligence community with nowhere else to go. He takes up jobs here and there to satisfy what's left of his shattered conscience, prevailing by ruthlessness and a reckless disregard for death despite having only a meager grasp of deduction.

His swathe-cutting draws comparisons to other Ellis protagonists, namely Spider Jerusalem from Transmetropolitan and Elijah Snow from Planetary, and also has a mysterious, unpleasant past like the latter, or like Fell. He and Elijah also seem to share a hairdresser.

The book's art often changes, depending on the tenor of the scene, from paintings to the usual inked fare to two-tone and B&W hatched sketches. Jones' psychedelic relapses create some particularly interesting story breaks.

Another Ellis signature: a film is in Development Hell.