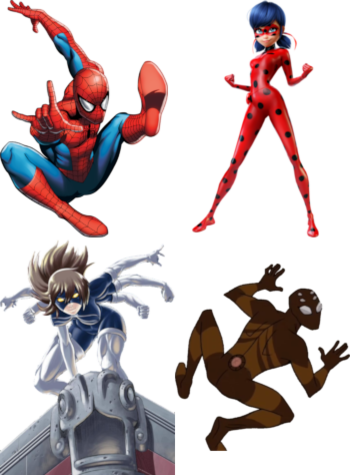 They do whatever a spider (and ladybug) can!note L-R, top to bottom: Spider-Man, Ladybug - okay, so not really a spider - , Spinnerette and the Brown Widow.
Advertisement:

While not the first superhero to exist, Spider-Man is often seen as one of the first heroes to whom comic book readers could relate. He's young, he has classes, he has a job, a family that loves him despite the tough times they face. A bully, a crush, friends that become his worst enemy, enemies that become the best of friends, and *gasp*... puberty! He's not rich, he's not perfect, he's not popular (In-Universe, anyway) but that does not stop him from caring with all his heart about the well-being of others doing the right thing.

With his universal popularity in comics, cartoons, video games and blockbuster movies, imitations are inevitable. They are often an Animal-Themed Superbeing painted in primary colors. They are usually Kid Heroes (ranging from adolescents to teen-hood) that everybody hates for one contrived reason or another. Whether it is due to rotten luck, human idiocy or if it is because they like to taunt and snark non-stop is anyone's guess. They typically have the basic Combo Platter Powers; Super Strength, Super Speed, Super Toughness and have a fast way to travel, ranging from Flight to Building Swing, usually received by some irradiated animal that bit them.

A spider-themed supervillain with the power to cling to walls, sling web and possesses super-strength.

A spider-themed supervillain with the power to cling to walls, sling web and possesses super-strength.